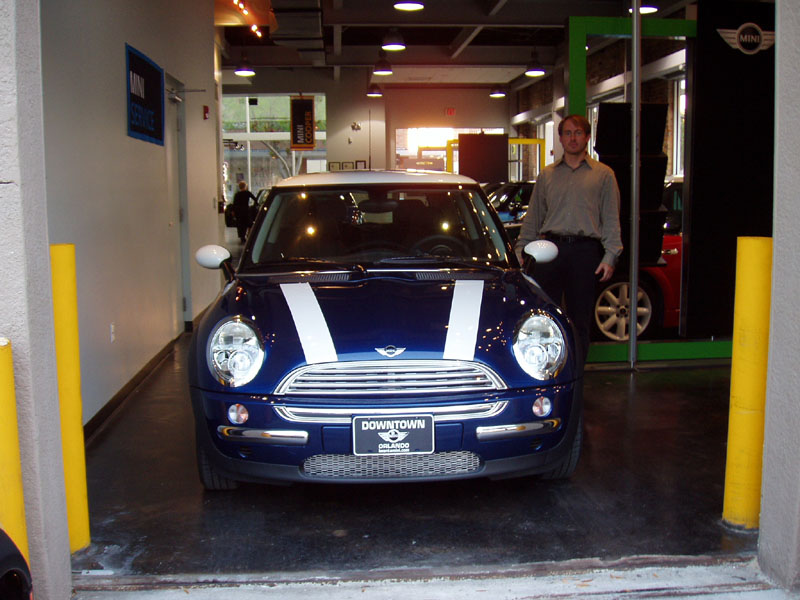 At the beginning of 2004, I had anticipated on buying a classic Mini, followed by a new MINI in a year or two. However, with the news that Indi Blue was to be discontinued with the end of the 2004 model year, and the MINI was to be updated, I decided to buy an original edition IB/W MINI Cooper while I still could.

I configured a MINI Cooper at MINIUSA.com and took it to Downtown MINI on Friday, March 19th. I was prepared to order a MINI and wait 12 weeks or so, but Downtown MINI mentioned an Indi Blue and White MINI was on the boat on the way to the U.S. and Orlando. It was very close to the MINI I had configured so I went home to think about it. I returned to Downtown MINI on Thursday, March 25th. After they agreed to swap the silver wheels for white, I agreed to buy the car and put down a $1,000 deposit to hold it. I expected to wait one or two weeks to take delivery.

The following Monday, March 29th, I went again to Downtown MINI to fill out the application and to order my dealer accessories. As I got out of my truck, I noticed a new Indi Blue and White MINI parked outside. I went for a closer look and noticed it was just like mine was going to be. Then I saw the VIN which seemed very familiar. Looking at the order sheet in my hand, I realized that this was my MINI. It had already arrived. I hadn’t brought a camera, but I did have my mobile phone and took a few photos with it:

Delivery Day. Tuesday, March 30th, I left work early, picked up Jigna, and headed to Downtown MINI.  Trevor was sitting just inside the back door ready to go, except he was still missing his white bonnet stripes. These were added while I filled out my paperwork. My friend, and fellow MINI owner, Cathy had bought me a keychain and chrome MINI Cooper license plate frame. Jigna bought me
a Custom MINI Pen and a MINI Journal and took several photos of Trevor and me:

After delivery, we went to dinner and then I took Jigna home. I parked Trevor next to Jigna’s MINI, Howard, and we took several photos:

Finally, I get home and park Trevor in his new home: