For 2020 I redesigned my website homepage and freshened up the site. It had been virtually unchanged for about four years. During the redesign, I had a look back to all of my previous websites; I have kept an archive of all major updates since 1996. Here are 20 screenshots of the homepage for my website covering 24 years. We’ll start at the present and go backwards in Web time.

Here is the new homepage launched on 1/1/2010. It has a rotating image gallery corresponding to the eight main pages.

Despite moving to WordPress in 2014, I still wanted to keep a static homepage that I could design however I wanted. I also wanted it to be responsive and use only div tags for placement. This was the original “activity icons” homepage before the addition of a Hiking page and a Gallery.

Windows 8 was released in late 2012. For this version of my website I wanted to simulate a Windows desktop experience. So my homepage was made to resemble a Windows login screen. No password was required to enter; simply click the yellow <enter> button.

My homepage for 2012 was again very simple with a single photo (taken at a portal window on a cruise ship). However, links to the five main pages were not still, they moved randomly around the screen, so you had to chase them with your mouse.

The original version with my cruise ship photo and a row of links that did not move.

Again, my homepage was a simple, centered image with a row of links below. This one was the final version using my South Park image, a rotating image of me standing, reading, and holding a beer inside the Seattle Public Library where I had visited recently. This page has my favorite background color (#86abc8) of all of them.

In early 2006 I created this placeholder homepage. It had the first version of my South Park image. After black and grey backgrounds, I wanted a bright color for this page, thus the vivid blue. The site had no content.

This homepage was inspired by science textbooks and modern art, influenced by Douglas Coupland’s website at the time. I kept the background dark grey so the colors would stand out. Clicking on the colored balls took you to the page listed in the legend below.

Always a minimalist design: a title, row of links, and a rotating image gallery in the middle. The image shown was a scanned, reversed, and manipulated scan of a sheet of bubble-wrap. Instead of a row of links separated by pipes, I imitated a math equation.

The original version had a row of text links above a rotating image gallery. The image shown was a real Spin Art Maker paining, scanned and color-inverted. All of the images were negative images of my photos and found graphics. This was the first design after moving to my own domain jamesday.net.

This homepage was very minimal with the only text being my name in a modern, purple sans-serif font. Each of the four square panes were mystery links, becoming negative upon hover. This was the first version on my Road Runner address at home.cfl.rr.com/jamesday.

The first version used a green serif font. This homepage launched in late 2000.

This version is starting to look like an “old-fashioned” Web 1.0 homepage. But all of the links were graphics, laid out in a grid. The photo was an arty black and white taken by an artist friend in the backyard of my house in Orlando

The original version of my early 2000 homepage using an older photo. HTML tables were still new at this time, so I took advantage of one to lay out my graphical links in rows and columns. A current trend was keeping the homepage to a single screen, with no scrolling, which was done here.

Late 1990s homepages were long pages, often laid out like a document. This version had a black background but the right-justified photo was a new feature. I used bright yellow links. This was the last homepage with an “Updated” date.

Here is an earlier 1998 version without my photo.

This homepage from late 1997 was the beginning of a long line of black-background homepages. I had started my first librarian job so it was kept short and professional (for the times), though I had the personal touch of including my girlfriend at the time in my main photo and links. My niece, Taylor, had just been born, so I added a link to a webpage I created announcing her birth.

This version shouts World Wide Web 1.0. It was the last version with a repeating background image. Although the date at the bottom shows “February 21, 1997” this version was actually from late 1997 (but before the version above). This was the first version at www.cflc.net/~jday.

This is the first version of my homepage from August 1996. It was created while I was in Library school. Notice the classic early animated “Under construction” sign and the Netscape 2.0 badge! No frames because frames were bad. But in 1996 just having a webpage with graphics was still fairly new.

My mom was a very early adopter of AOL using a dial-up modem, so I had access to online services as a teenager. Since the day in the UCF library when I first heard about the Internet and World Wide Web, I was fascinated. A friend gave me a floppy disk containing the Mosiac browser along with TCP/IP stack software that needed to be loaded before accessing the Web. I had the eighth student email address at UCF which I purchased at the bookstore for $25! And as I explored the Web, I knew I had to have my small place on it. I also saw how the Web was going to fundamentally change libraries and that started me considering a career as a librarian instead of engineering. I wanted in at the beginning.

As you may have seen elsewhere on my website, I created and maintain a library technology website called Library Technology Launchpad. On that site I write about various topics relevant to librarians such as websites, online resources, open access, and others. My most popular series is the Basics and Resources Series. In this collection of articles, I have covered topics such as APIs, Discovery Services, Linked Data, OAI-PMH, proxy servers, and more.

While searching for some sources for an article posted today, I was pleasantly surprised to see my own work as a featured result. I entered the search terms “library discovery services” (without the quotes) into Google and got back a screen of search results. There at the top as the “featured snippet” was a description from, and link to, my Library Technology Launchpad website.

So from a search that resulted in 324 million results, Google selected my article as the top source for the topic. In order to see whether Google was basing this ranking on my searching or browsing history, I asked a colleague to perform the same search. She confirmed that she also got my website as the featured snippet.

Anyone who posts articles to the Web hopes to get listed on the first or second page of Google search results. Although I’ve frequently found posts or pages from my Library of Motoring website high in Google results, this is the first time that I have had, to my knowledge, an article featured on Google. That it is a professional library article makes it more satisfying. Hopefully this inclusion indicates a high search ranking for my Library Technology Launchpad site as a whole.

Staff at Embry-Riddle just completed annual performance reviews.  For the year from March 2015 through March 2016 I had three major projects, all completed before their respective deadlines.

Last year I completed the planning, analysis, and requirements for the new Hunt Library website.  This year I began the development of the site organization and building of the site pages and content.  I worked with the university’s Web Team to develop features of the content management system for library hours and news.  Once the design was completed, I worked with the library’s Assessment Team to assess the usability of the website which resulted in some small but important improvements.  The Hunt Library website launched on time with little disruption to our online services. 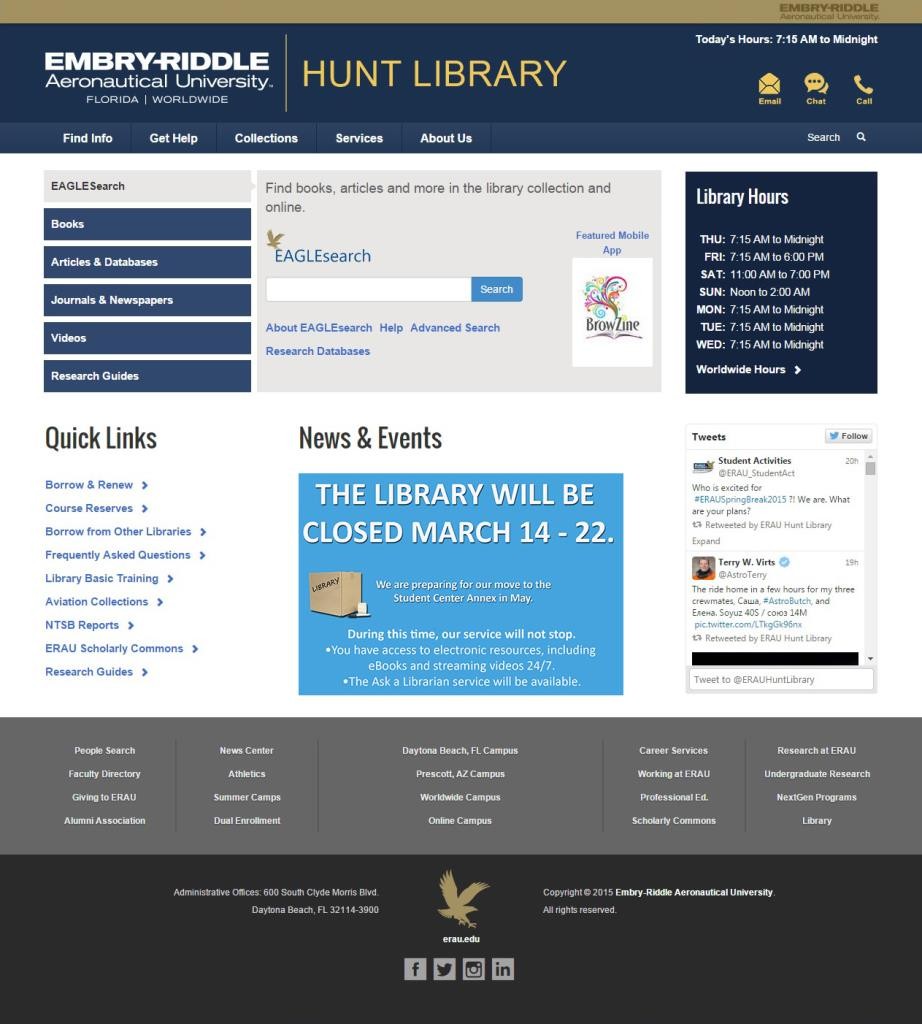 Sometime in early 2015, we were told by the university’s IT department that the ColdFusion server was old and was going to be decommissioned. So I started “Project Abandon ColdFusion” to systematically analyze and replace all ColdFusion forms and applications.  I looked to utilize our existing third-party services.

All of the ColdFusion forms and applications were successfully replaced before the ColdFusion server was decommissioned in September 2015. ColdFusion forms were recreated using Springshare’s LibWizard (ex. Research Request form).  The Frequently Asked Questions application was replaced with an FAQ using LibAnswers.  The Library Reported Issues application was replaced by a dedicated queue in LibAnswers (see form) which was successfully implemented and improves on the previous method.  I developed a Recommended Websites replacement with LibAnswers by using a dedicated and highly-customized Frequently Asked Questions group.  The internal professional journal routing application was replaced (temporarily) with a shared spreadsheet in SharePoint (now a form).  The Library hours feed on the Hunt Library website was replaced by a Google Sheet developed by the Web Team. The News page was replaced using the website CMS blog function at http://huntlibrary.erau.edu/news.

Previously, the library was using a combination of a third-party wiki and a shared network drive to function as a staff intranet.  Last year the university made SharePoint available to departments and the library administrators made the decision to utilize it for our new staff site.  I attended some training sessions and was made an Administrator for the Hunt Library SharePoint site.  The library’s SharePoint Site was completed with fully-functional sites for library departments, teams and committees, and staff information, help, policies, and procedures.  All content from the previous Hunt Library Staff Wiki was either archived or migrated to SharePoint.  Designated staff from each department and team are now adding apps and content to their own sites.

In addition, I conducted training sessions for library departments, teams, and individuals on using SharePoint.  I created a basic SharePoint Help page and will continue adding to it.  Soon, I will begin a series of about ten “SharePoint Tip of the Day” emails to give staff useful SharePoint help in bite-sized pieces. 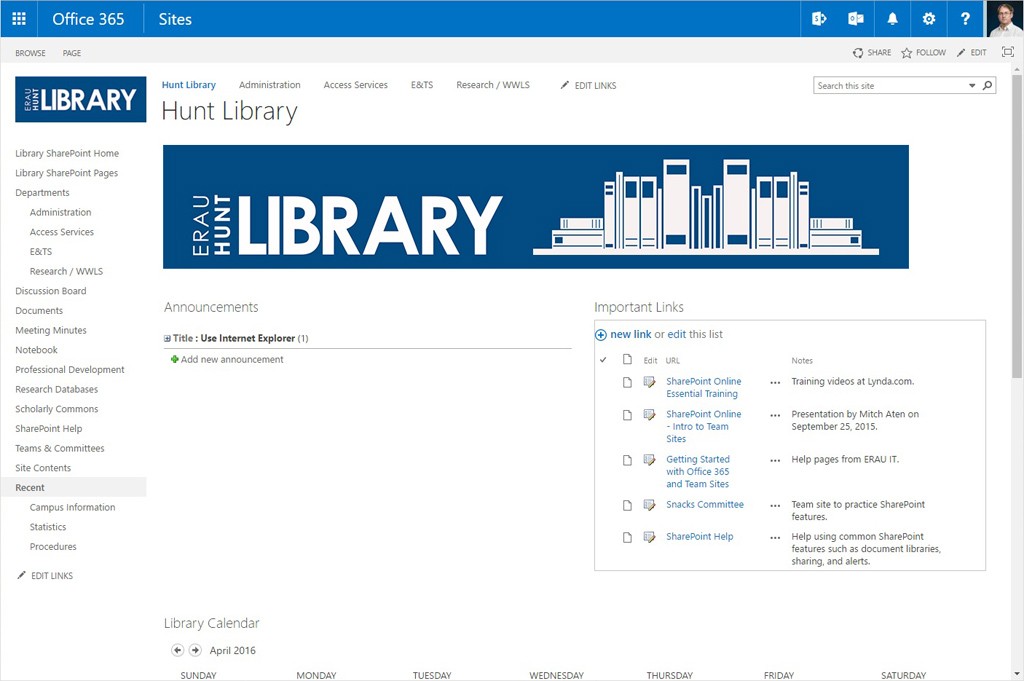 It was a lot of work but it was enjoyable to have three large, high-impact projects to work on.  It is rewarding to complete projects on-time and be able to have tangible results to show for the effort.  It was a very successful year.

​Today I relaunched my Library Technology Launchpad website. I moved it from WordPress.com to my own host and gave the site a redesign. The previous version ran from 2011 to 2013 with social media updates continuing through 2014.

At Library Technology Launchpad I’ll cover technology relevant to librarians and libraries. Covered topics will include: